I decided that as I have had darker and more vibrant colours on lately I wanted something that looked light, clean, and fresh.  Since I had China Glaze Snow sitting in my untrieds, I thought I would make use of it.  I put on two coats of Snow, the formula was OK but whites can tend to be a little streaky and this was no different.  It did even out nicely though.  After letting it dry I added a coat of China Glaze Fairy Dust, and it did look rather pretty just as it was then, but I wanted to add a little something extra, so out came the fauxnad plates.  I used a konad dark navy blue stamping polish (I'm sorry I don't know the name of it, it came in a kit) and used a design with really pretty flowers in an almost filigree type pattern.  I then finished off with a blue shimmer top coat.  This top coat I actually frankened but the nearest to buy would be CND Effects Sapphire Sparkle.

I only wish the sun had come out for me, as I haven't been able to capture the lovely blue shimmer, and the sparkle of the fairy dust, but it did turn out to be a really pretty manicure that looks way better on me than I thought it would.  I even had a compliment from my boyfriend who said 'oh white, wow I'm not used to seeing pale colours, well, not on you anyway'.  Now I come to think of it, I'm not sure that was actually a compliment.  Oh well, I'm taking it as one anyway!  I hope you like how it turned out, as usual the pics are click-able for detail should you wish. 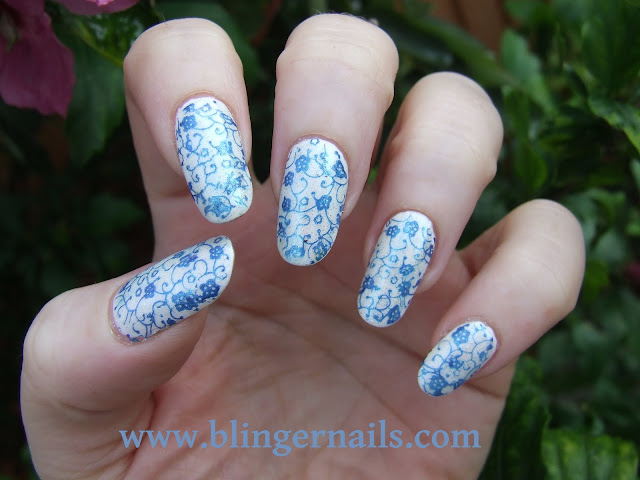 I love this design. I have used this print several times. I love Fairy Dust too!!! It really brings out the base color!

this is a really pretty design! i love the colours too

Really pretty love fairydust too especially over a creme white or black :)

This is really pretty! It reminds me of a china teacup set (:

Recollect the supportive exhortation you have learned as you take a shot at taking your game up an indent. With some training and a longing to improve, you will be one acceptable b-ball player.Satta King
Play Bazaar