Wow exciting times, its blog fest 2012 organised by the wonderful girls at piCture pOlish there will be 80 bloggers around the world all posting today to launch the new shades from piCture pOlish, and I count myself honoured to be a part of this again :)

So, the polishes!  I was sent 'orbit' and 'warning' as my shades, and I am loving them both.  One is a one coater, oh yes!  First up though, we have 'warning'. 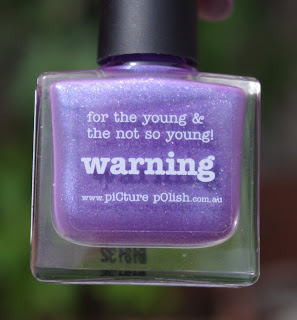 This one is such a hard one to describe, it is a duochrome sparkly interesting and beautiful polish, it doesn't really fall into any one category and I definitely don't have a dupe for this.  It has a mother of pearl type of effect, it is duochrome but not in the expected sense, in that all the colours can be seen mostly at the same time.  There is also a micro sparkle in there which catches the light and I can see blue, purple, silver and pink but this isn't apparent individually unless you look really hard.  It is a tough one to describe accurately, but all the ingredients make up to a lovely blue purple colour that is so pretty.  It was a little sheer, but not problematical and built nicely after three coats.  I wouldn't care if it took ten coats though, just look at it!  All sparkly and pretty and making me go all girly pah!  It makes me think of faeries and dragonfly wings and magical things.  I will try layering this one for sure, but right now I wanted to show the polish in all its own splendour.  Isn't she a pretty one. 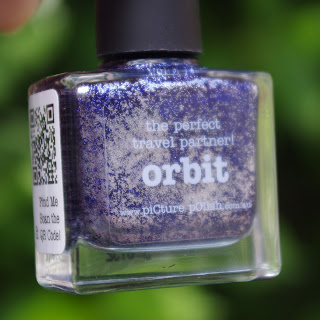 Second one up is 'orbit'.  Oh my!  I just love this one so much more than I thought I would.  It looks promising in the bottle, but on the nail, oh yeah it made me have a moment.  It is a perfect midnight blue with a hint of purple and a gorgeous sparkle.  In the shade it has a bit of a suede type finish, with silvery and blue particles in there giving it an extra dimension.  In the sun it sparkles like a glitter.  It is absolutely stunning.  I also slapped a shiny top coat on it because I just had to, and it really made it pop.  Oh and did I mention, its a one coater!  You betcha that made me happy shaped,  A quick mani that looks this good, oh yeah sign me up for some of that!


I hope you like these as much as I do, and believe me when I say they really do look better in real life.  The bottles all have a QR code which can be scanned and that will take you straight to piCture pOlish online or to a Network Member depending where the polish was purchased, pretty cool.  These can be ordered direct from www.picturepolish.com.au or from any of the girls in their international polish network.  You can also follow the girls at piCture pOlish on facebook or on Twitter or if Pinterest is your thing, you can follow them there too!
Posted by Blingernails at 21:52

Oh! I love both! I have Dorothy and looks like Orbit but in red, they are amazing, aren't they? :-)

Both of these are beautiful!

The nerves running through the thoracic area of the spine control the stomach functions and can cause these and other digestive disorders. play bazaar
satta king
play bazaar

You need to wear garments that let you move as well as could be expected. On the off chance that you don't, you'll see your time on the court as truly hopeless. satta king
play bazaar

Presently, utilize two hands to spill the ball. Curve your knees and picture the ball going into the b-ball as you take your shot. Satta King
Play Bazaar